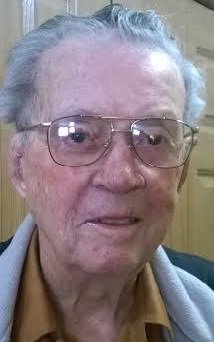 Wilbert Gust Erickson, 98, passed away on December 30, 2019 at St Mary’s Hospital.  He was born October 1, 1921 in Hermantown, MN on the family dairy farm, to Alfred and Alice Erickson.  Wilbert attended a two–room school house through the eighth grade.

Wilbert served in the United States Army/Air Force from 1942 to 1946 during World War II.  He was injured during training when the jeep he was riding in left the road while doing night maneuvers.  He was hospitalized for several months and could have been honorably discharged as a disabled veteran but chose to stay in the military and serve his country after he was healed.  He was stationed in Guam where he built buildings on the base and constructed new runways. He is a member of DAV.

After serving, Wilbert returned to the states where he met and married the love of his life, Mary Elizabeth Cox on August 9, 1947. They were married for 65 years, building a life together, before Mary passed away in 2012. They lived in a home on the hill in Duluth where they kept busy with the latest happenings in the Duluth area via the police scanner, visiting family around the state, and being together.

Wilbert took pride in his Swedish heritage. He would often make jokes and his family would tease regarding “Swedes” and their characteristics. Wilbert had a soft spot for cats, enjoyed eating sweets, drinking coffee, watching the deer and birds outside his window and golf on TV. He was a regular at Bridgeman’s in Duluth where everyone knew him by name, and order!

He is preceded in death by his wife Mary of 65 years; parents Alfred and Alice Erickson; brothers, Erick and Bertil Erickson; sisters, Dora Kruger, Olga Lind, Hilda Larson and Laura Larson.  Wilbert is survived by many nieces and nephews, and grand nieces and nephews.

Visitation will be at 10 a.m. one hour prior to 11 a.m. service on Saturday 1/4/20 at Bell Brothers Jarvi Dowd Funeral Home, 925 East 4th Street, in Duluth.  Entombment will be at Sunrise Cemetery in Hermantown.

Donations should be given to DAV.

To send flowers to the family or plant a tree in memory of Wilbert Erickson, please visit Tribute Store
Saturday
4
January