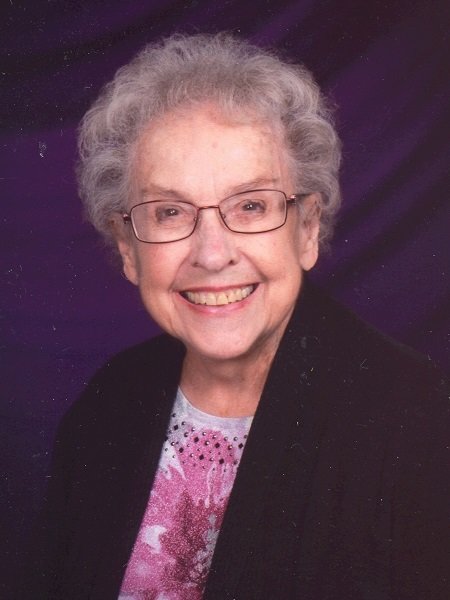 Garnette was born to the late John and Edith Sykes in Missoula, MT on November 22, 1922. Garnette, her parents and siblings, lived in Kansas and Iowa before settling in Duluth, MN. She attended Central High School.

She was a lifelong member of Duluth Gospel Tabernacle and active in its Sunday school and music programs.

On May 6, 1949, Garnette married Sidney Paul Petersen of Minden, NE. They lived in Duluth until 1957 when they went as missionaries to Liberia, West Africa. In addition to their missionary work, Sidney and Garnette served churches in Breckenridge, MN and Palisades Park, NJ. After retirement, they were interim pastors at churches in Brooklyn and Staten Island, NY.

In 2003, Garnette and Russell Doty renewed their lifelong friendship, and, after a brief courtship, married on August 2, 2003.

At the age of 92 Garnette chronicled her early years as a missionary to Liberia in her book titled, Ma Petersen’s Liberia.

A gathering of family and friends will occur from 10 a.m. until the 11 a.m. Celebration of Life service Thursday, April 18 at Duluth Gospel Tabernacle, 1515 W. Superior St. Interment will be at the Minden Cemetery, Minden, NE.  In honor of Garnette’s work and love for her friends in Liberia, memorials to Duluth Gospel Tabernacle Medical Missions are appreciated.

To send flowers to the family or plant a tree in memory of Garnette Doty, please visit Tribute Store
Thursday
18
April