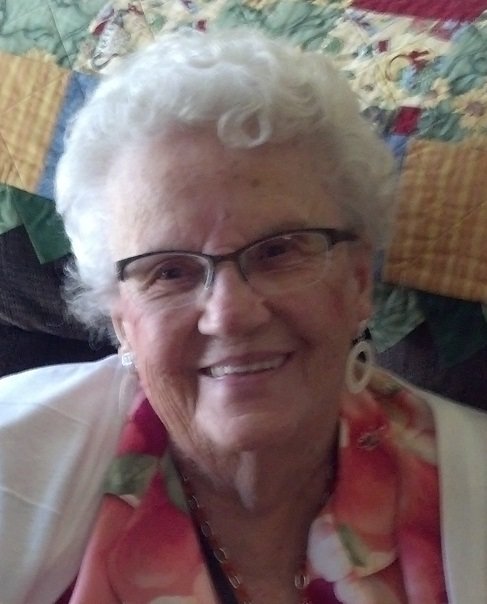 On March 20, 2019, Florence "Lil" (Smerdon) Rendulich, age 97, went peacefully to be with the Lord surrounded by her loving family.

Lil was born on April 28, 1921, in Grenzhausen, Germany, to William H. Smerdon and JoAnna Strodter.  The family moved to the United States when Lil was one year old and settled for a short time in Iowa.  In 1926, they moved to Duluth where Lil attended Stowe and Morgan Park schools while working part time at her father's store "Smerdon's Market" in New Duluth.  She was later employed by St. Mary's Hospital, and then became a buyer for the Children's Department at Wahl's Department Store in downtown Duluth for 15 years.

At the Stowe School ice rink, she met the love of her life, Rudy Rendulich, who skated into her heart.  They married in August of 1942.  They went on to raise four daughters from their homes in the New Duluth and Fond du Lac areas.  Lil was a very dedicated wife, mother, grandmother and great-grandmother.  Family and friends were the light of her life, and she cherished them all.  "GG" was an avid fan of her great-grandchildren's sports and dance activities.  Many happy times were spent exploring the U.S. in a RV with her sister Mary Anne and Jim with all roads leading to brother Bill and Vel.  She was an enthusiastic Twins fan calling the plays from her recliner.  Lil had many life-long friends and was one of the remaining members of "Couples Club" which met for special dinners for over 50 years.  She was a member of the Fond du Lac Community Church (Mission Creek Church) for over 30 years, the Morgan Park and Gary-New Duluth Senior Clubs, Ladies' Aide, Sewing Club and the Lunch Ladies.

Lil is widely known for her kindness, thoughtfulness, and generosity by putting all others before herself.  Her many talents included singing in numerous choirs until the age of 85, cooking, baking, sewing, crafting, gardening, and fierce Bingo playing.  Lil is fondly remembered for her delicious potica, always full "cookie jar" and wonderful baked treats that she shared with all.

We are eternally grateful to the entire staff at Elmhurst Commons Assisted Living for their loving and exceptional care of Lil.  They welcomed her with open arms and made her a part of the family.  Lil's "girls" and "gal pal" were so precious to her.  A heartfelt thank you to St. Croix Hospice for their special care.

As in life, she now walks with God.  Heaven gained an awesome angel.

To send flowers to the family or plant a tree in memory of Florence Rendulich, please visit Tribute Store
Monday
25
March