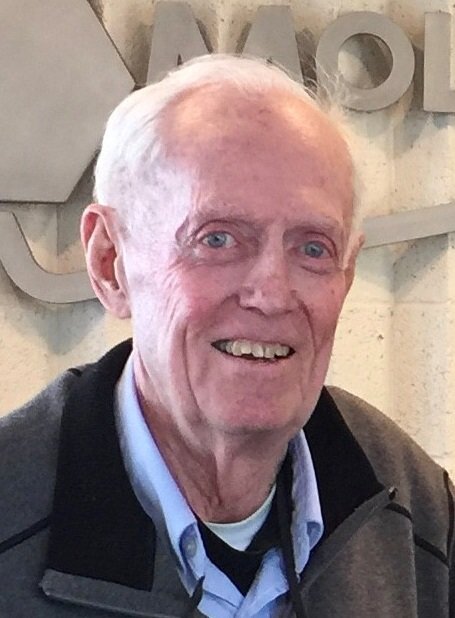 Don’s father passed on a strong work ethic in him at an early age. He often told stories of carrying 100# bags of flour over his shoulder and heavy 5 gallon jelly pails into area bakeries while in high school to help the family bakery supply business. This led to a long and successful
career in the baking industry. He became President/Owner of Moline Bakery Equipment, Inc. in 1963 and grew it as a manufacturer of industrial machinery for many of the world’s largest food companies.

Don was a skilled manager, visionary leaderand polished salesman whose favorite line was “nothing happens until somebody sells something”. A simple business compass putting customers and employees first served him well. He was widely known and respected in the industry which included 58 years as a member of the American Society of Bakery Engineers. Don stepped back in 1995, but never really retired, paying weekly visits to see the factory and people he worked with until his final days.

Don was a patriotic veteran of the US Air Force and very loyal to his alma maters, Duluth Central High School and UMD. He established scholarship endowments for both institutions and gave much of his time to the community including the following Board positions: St. Luke’s Hospital, St. Luke’s Foundation, West Duluth Business Club, Duluth Chamber of Commerce, UMD Center for Economic Development and Business School Advisor, Duluth-Superior Area Community Foundation, United Way of Greater Duluth and Chester Park United Methodist
Church. He was co-founder of the Congdon Park Hockey Association, youth coach for 12 years and was an active member of Northland Country Club. He enjoyed golfing with friends and family almost as much as the many fishing trips he took to Crow Lake in Nestor Falls, Ontario.

Family was the most important part of Don’s life. He married Nancy Melander in 1954 and they raised their three children in Duluth. He supported all of his kid’s activities and continued this passion with his grandchildren which gave him great joy for many years.

To send flowers to the family or plant a tree in memory of Donald Moline, please visit Tribute Store
Thursday
14
March