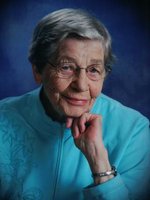 Margie was born to Sheldon and Lucile Shepard on January 15, 1924 in Duluth, MN. She graduated from Duluth Central High School in 1941 and from University of Illinois in 1945 with a degree in zoology. Following graduation, she worked at Abbott Laboratories in Chicago.

Margie married Dr. Richard Kline of Grand Rapids, MN on June 25, 1949 in Duluth. They made a career move for his medical practice to St. Cloud, MN in 1958. She lived there until 2008, when she moved back to her hometown of Duluth, bringing her life “full circle”.

She planted deep roots in her beloved community of St. Cloud, forming many lasting friendships and raising her four children there after being widowed at a young age in 1964. She was active in First United Methodist Church of St. Cloud for 50 years and volunteered at St. Cloud Hospital for 40 years. She also volunteered at the Great River Regional Library and the Salvation Army. Upon moving to Duluth, she became a member of Hope United Methodist Church.

Margie loved bird-watching, reading, knitting, cross-stitching, traveling, and attending music performances. Many fortunate friends and family members have been the beneficiaries of her beautiful handiwork. The legacy that Margie passed on to her children was the importance of giving freely and generously of one’s time and gifts.

A memorial service will be held in the Benedictine Living Community Chapel on Wednesday, January 15th at 1:00 p.m. If desired, memorials to the Alzheimer’s Association, please.

May you be replenished and peaceful in the Great Hereafter, Margie, and be joyously reunited with your loved ones who await you there. Fly with the birds, Mom!